The NAF Board of Directors is made up of leaders in their fields who advocate for improving education in the United States. Through their leadership, guidance, and support, NAF is able to deliver on its promise of developing the next generation of future ready employees. 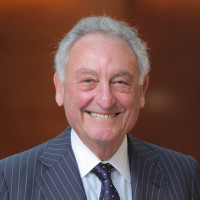 Mr. Weill is Chairman Emeritus of Citigroup and CEO of Casa Rosa Ventures.  He retired as CEO of Citigroup on October 1, 2003, and served as non-executive Chairman until April 18, 2006.  On April 29, 2014, Mr. Weill was named a member of CNBC’s First 25: top rebels, icons and leaders, a definitive list of 25 people around the world who have had the greatest influence, sparked the biggest changes and caused the most disruption in business over the past quarter century.

Mr. Weill, who had been Chairman and CEO of Travelers, became Chairman of its predecessor, Commercial Credit Company, in 1986, successfully leading the company through a public stock offering by its then-parent, Control Data Corporation.  Commercial Credit acquired Primerica Corporation in 1988 and adopted its name until 1993, when Primerica acquired The Travelers Corporation and adopted the Travelers Group name.  In 1997, the company acquired Salomon Inc. and combined it with its Smith Barney unit to form the global securities and investment firm, Salomon Smith Barney.

Prior to 1986, Mr. Weill had been President of American Express Company and Chairman and Chief Executive Officer of its Fireman’s Fund Insurance Company subsidiary.  His affiliation with American Express began in 1981 when the company acquired Shearson Loeb Rhoades.  Shearson’s origins date back to 1960 when Mr. Weill and three partners co-founded its predecessor, Carter, Berlind, Potoma & Weill.  He served as the firm’s Chairman from 1965 to 1984, a period in which it completed over 15 acquisitions to become the country’s second largest securities brokerage firm.  In 1993, when Travelers Group acquired Shearson Lehman Brothers’ retail brokerage and asset management businesses, he was reunited with the firm he founded.

Mr. Weill served as Chairman of Hamilton Insurance group from 2014 to 2016 and remains a consultant to the company today.  He became a Director of the Federal Reserve Bank of New York in 2001 and served in this capacity until December 31, 2006.  He also served as a Director on the Boards of United Technologies Corp. from 1999 to 2003, AT&T Corp. from 1998 to 2002, E. I. Du Pont Nemours and Company from 1998 to 2001, and Koc Holding from 2009 to 2014.  Mr. Weill is a former Vice Chairman of The Business Council and served on the Working Group on Child Care, headed by then U.S. Secretary of the Treasury Robert E. Rubin.  In 1998, Mr. Weill was the recipient of Financial World Magazine’s CEO of the Year Award and received the same honor from Chief Executive Magazine in 2002.  The EastWest Institute awarded Mr. Weill their distinguished Corporate Leadership Award in December 2005 at an event in London with Prime Minister Tony Blair.  Mr. Weill is a lifetime member of the Council on Foreign Relations and a member of the Board of Advisors of the Baker Institute at Rice University.

President Bush asked Mr. Weill, along with four other private sector business leaders, to lead a nationwide effort to encourage private donations for relief and reconstruction in response to the South Asia earthquake that occurred on October 8, 2005.  Working with the Committee Encouraging Corporate Philanthropy, a nonprofit forum of CEOs and Chairpersons, to which Mr. Weill was named Chairman of the Board in July 2004 and is now Honorary Chairman, Mr. Weill and the business leaders quickly established the South Asia Earthquake Relief Fund.  Through the efforts of Mr. Weill and the business leaders, the private sector raised over $116 million in cash and in-kind services to help the earthquake victims.  On September 21, 2006, Pakistan President Pervez Musharraf presented Mr. Weill with the “Sitara-i-Eisaar” (Star of Sacrifice) Award at a special investiture ceremony.

The 1997 recipient of the New York State Governor’s Art Award, Mr. Weill stepped down as Chairman of the Board of Trustees of Carnegie Hall in 2015 after serving in this role for 24 years.  Mr. Weill is now President of Carnegie Hall, joining his mentor the late violinist Isaac Stern, as only the second person to hold the title of President since Carnegie Hall was established as a non-profit in 1960.  For Mr. Weill’s 70th birthday, Carnegie Hall raised a record $60 million in one evening thru a generous $30 million match by Mr. and Mrs. Weill for the Weill Music Institute, which established broad-reaching music education programs.  Mr. Weill is also Chairman of Weill Hall and The Green Music Center Board of Advisors at Sonoma State University and Chairman of the Lang Lang International Music Foundation.

Mr. Weill is Chairman Emeritus of the Board of Overseers of Weill Cornell Medical College and Weill Cornell Graduate School of Medical Sciences.  He joined the board in 1982, became chair in 1995 and retired as chair on January 1, 2015.  Weill Cornell established the first American medical school overseas in Doha, Qatar, in 2001, and to this day, it still remains the only one to offer an MD degree outside the U.S.  This was made possible through a special partnership between Weill Cornell and the Qatar Foundation for Education, Science and Community Development.  Weill Cornell’s inaugural class in Qatar graduated in 2008.  Mr. Weill also serves on the Board of Governors of Sidra, a 380-bed Specialty Teaching Hospital in Qatar.  Sidra is supported by a $9 billion endowment from the Qatar Foundation.  Mr. Weill is a member of the prestigious American Academy of Arts and Sciences.  A Trustee Emeritus of Cornell University as well as the recipient of the school’s first Entrepreneur of the Year Award in 1984, Mr. Weill serves on the Advisory Council of its Johnson Graduate School of Management.  In addition, he is Chairman of the Executive Council of the University of California, San Francisco and a Trustee of Hospital for Special Surgery.

Long a proponent of education, Mr. Weill instituted a joint program with the New York City Board of Education in 1980 that created the Academy of Finance, which trains high school students for careers in financial services.  He serves as Founder and Chairman of NAF, which oversees more than 88,000 students in 716 career-themed Academies of Finance, Hospitality and Tourism, Information Technology, Engineering and Health Sciences, in 36 states, as well as the District of Columbia.  Ninety-eight percent of NAF’s students graduate, with ninety-two percent having plans to pursue post-secondary education – often as the first in their families to attend college.  New York Governor Andrew Cuomo appointed Mr. Weill as a Member of his New York Education Reform Commission.  Mr. Weill has received honorary degrees from Bank Street College of Education; Howard University; Hofstra University; the University of New Haven; Sonoma State University; and the Technion Israel Institute of Technology.

The Real Deal: My Life in Business and Philanthropy, Mr. Weill’s book, is a New York Times and Wall Street Journal best seller.

A longtime friend of President Gerald R. Ford’s, Mr. Weill was an Honorary Pallbearer at the late President’s State Funeral and is a Trustee of the Gerald R. Ford Foundation.  Mr. Weill was awarded the 2013 Montblanc de la Culture Arts Patronage Award and he and Mrs. Weill were recipients of the 2009 Carnegie Medal of Philanthropy Award.  Mr. Weill is also the recipient of the 2014 Jackie Robinson Foundation Lifetime Achievement Award.

Mr. Weill, who was born on March 16, 1933, is a graduate of Cornell University.  He and Joan celebrated their 61st wedding anniversary this past June.  They have two children and four grandchildren.